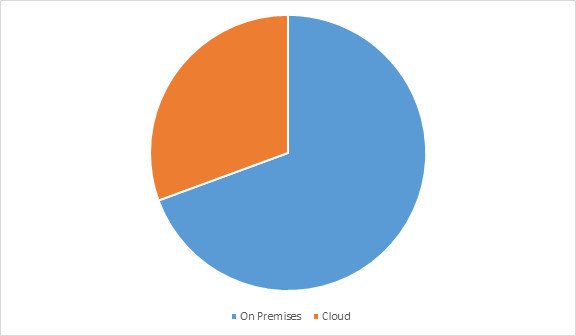 Cloud deployment is growing at a highest CAGR of 36.3% in the forecast period owing to its operational flexibility and real-time deployment ease to companies compared to on-premises deployment. It also offers numerous benefits, including reduced operational costs, simple deployment process, and higher scalability in terms of connected resources. Additionally, the cost-effective cloud-based solutions ease installation when compared to the on-premises solutions. The highest level of data security and reliability offered by the cloud deployment are increasing the share of this deployment in the forecast period. Several companies are providing solutions related to this deployment. For instance SimScale is a full-cloud CAE 3D Modelling and Simulation Software that helps to perform Computational Fluid Dynamics, Finite Element Analysis, and thermal simulations for CAD models in the cloud. Similarly, AnyLogi? Cloud is a cloud-based simulation tool that allows users to run simulation models such as Finite Element Analysis and Computational Fluid Dynamics online using just a web browser and share them. Hence these benefits are analysed to drive the market growth in the forecast period 2021-2026.

Automotive sector is expected to witness a highest CAGR of 37.2% the forecast period. Increasing focus on R&D activities and rapid technological changes owing to the changing government norms for vehicle safety are projected to drive the market. With increasing connectivity and digitalization, OEMs are focusing on improving cybersecurity over connected vehicles & devices, which is expected to drive the automotive simulation market for software such as Finite Element Analysis and Computational Fluid Dynamics. Along with cybersecurity, rapid infrastructure development and advancements in 5G technology are Moreover companies such as Nvidia, IPG automotive and so on are collaborating with several global companies for advancements in these 3D Simulation Software. In 2019, Nvidia had partnered with Toyota for autonomous vehicle simulation platform drive constellation, the cloud-based platform. This platform would enable the self-driving car developers to run tests on virtual, rather than real roads. In 2018, IPG Automotive signed a partnership agreement with Transpolis SAS to develop innovative solutions in the field of large-scale simulation. Hence these factors are anticipated to fuel the growth of the 3D Simulation Software market in the forecast period 2021-2026.

3D Simulation Software market in North America region held significant market share of 36% in the forecast period. Early adoption of advanced technologies in aerospace, defense and other has been increasing the demand for 3D Simulation Software. In addition, the governments in the North American region are constantly focusing on innovation and investment for a greener work environment. The regulations associated with the eco-friendly work environment are becoming stringent in the region and as a result, companies are adopting simulators to test product viability before manufacturing. In U.S. strict guidelines imposed by the Federal Aviation Administration (FAA) and Federal Aviation Regulations (FARs) regarding use of simulators for training purpose. According to new FAR regulations, Air carriers must compulsorily develop training programs using simulators that meet the upgraded requirements. Stringent regulations as such will drive the usage of simulators thereby driving 3D Simulation Software in this region. According to U.S. Department of Defense, by 2022, U.S Military had committed to invest more than $11 billion for virtual, augmented and mixed reality training systems and simulator. Hence these factors drive the market growth in the forecast period 2021-2026.

3D Simulation Software companies are strengthening their position through mergers & acquisitions and continuously investing in research and development (R&D) activities to come up with solutions to cater to the changing requirements of customers. In addition companies such as Siemens, Rockwell, Ansys, and so on are planning to invest in advanced technologies such as artificial intelligence with a target to provide cost competitive Finite Element Analysis and Computational Fluid Dynamics products in the market in the forecast period. In 2020 Ansys Inc. entered into a definitive agreement to acquire Lumerical Inc., which is a leading developer of photonic design and simulation tools. The acquisition will add a wide range of photonics products to the Ansys Multiphysics portfolio, providing customers with a full set of solutions to solve its next-generation product challenges. In 2019, Altair Engineering Inc. launched a new manufacturing simulation solution for additive manufacturing, Inspire Print3D. The solution is aimed explicitly at selective laser melting (SLM). In 2020, Kumux has launched the 2.0 version of its spectral 3D Simulation Software, which allows the creation of differential lighting, beneficial to people’s health and plant growth. In 2018, Simufact Engineering, an MSC Software company and expert in manufacturing process simulation, had launched Simufact Additive software solution for the simulation of metal additive manufacturing processes. Hence these advancements are analyzed to drive the market growth in the forecast period 2021-2026.

The aerospace & defense industry has been one of the major end users of simulation as they use modelling and simulation for numerous purposes including, training of individual soldiers, conducting joint training operations, formulating operational plans, developing doctrine and tactics, and analyzing alternative force structures, Finite Element Analysis and Computational Fluid Dynamics. The technology fulfills critical defense needs of command, control, and communications; manpower, personnel, and training; computing and software; electronics; and manufacturing technology. These defense models and simulations vary in a broad range from components of large weapons systems through system-level to simulations of missions and battles, and so forth. Such significant applications are the major factors driving the growth of the global market in these industries.

Data security is the major challenge for 3D Simulation Software